Birds Do Not Take Inequity Lightly

Behavioural scientists find that, similarly to humans, crows and ravens are sensitive to inequity in terms of working effort and reward distribution.
FULL TEXT The full text of this article is available.
PEER REVIEWED This article has been peer reviewed.
ANIMAL RESEARCH This article involves research on captive animals, which Faunalytics opposes.
Summary By: Lukas Jasiunas | This is a summary of an external study | Published: April 27, 2017
Photo by Flickr user yuichirock 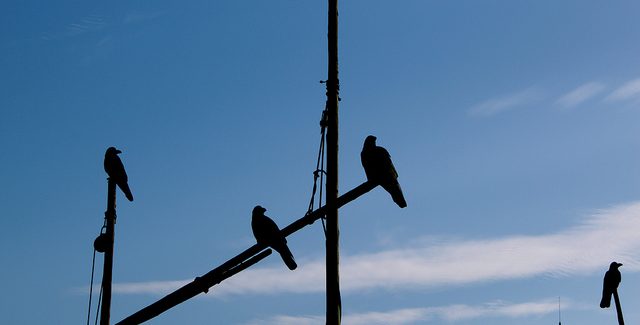 When humans notice unfair treatment or unequal rewards for similar tasks, we tend to not feel very good about it, and it can be the source of much interpersonal conflict. Whether other species notice unfairness or inequality is the subject of some debate, and researchers have started to study the phenomenon. Recently, behavioural scientists at the university of Vienna, in Austria, wanted to study sensitivity to unequal reward and working effort in birds. The effect of absence of reward in the presence of a rewarded partner was also studied.

In a token exchange task the researchers tested both behavioural responses to inequity in the quality of reward (preferred vs less desirable food) and to the absence of reward in the presence of a rewarded partner in 5 pairs of corvids (6 crows and 4 ravens). The birds decreased their performance of the token task when the experimental partner received the reward as a gift, which indicates that they are sensitive to other individuals’ working efforts. They also decreased their performance in the inequity condition compared to the equity condition. Corvids have previously been shown to engage in various forms of cooperation, demonstrate high selectivity in partner choice, coalition and alliance formation. The researchers hypothesized that the birds would decrease performance if they were indeed sensitive to inequity in working effort shown by other individuals.

The observations showed that the birds worked more in the equity scenario than the inequity condition. Furthermore, the effect was stronger when high quality food rather than low quality food was offered as a reward. Additionally, the scientists wanted to evaluate inequity aversion; they did this by looking at how birds that were asked to make a token exchange would react after watching another bird getting food without having to exchange. Surprisingly, the exchange rates were higher in the equity condition than in the effort control, indicating that the birds may evaluate the efforts involved in an experiment.

Interestingly, the strongest effect found during this study was in respect to working effort: when the model individual received the reward as a ‘gift’ without exchanging a token first, the observing bird, required to exchange for the reward, decreased his/her performance. The unfairly treated birds also tended not to take the food even after having exchanged the tokens more often. The study showed first evidence of behavioural responses to inequality in birds.

When exposed to inequity in the quality of food given, the corvids exchanged less often in the inequity experiments. On the other hand, the presence of a social partner was shown to have a positive effect on how often the birds would exchange tokens. Despite the small number of observed birds, the lack of reward rejections after having successfully completed the exchange in the low quality reward condition provides further support that the birds do treat inequity in reward differently from low food quality.

Despite the small sample of observed corvids, animal rights advocates can definitely use the indication of inequity aversion in birds when stressing the multi-disciplinary intelligence of birds. Though studies such as this rely on captive animals to generate data, it’s important to be aware of their results and do what we can to employ them to teach empathetic values to the general public.