While some continue to debate the sentience of fishes, humans slaughter them by the billions. New research focuses on how to reduce the suffering.
ABSTRACT ONLY Only an abstract of this article is available.
PEER REVIEWED This article has been peer reviewed.
ANIMAL RESEARCH This article involves research on captive animals, which Faunalytics opposes.
Summary By: Faunalytics | This is a summary of an external study | Published: September 15, 2016
Photo by Flickr user kplawver 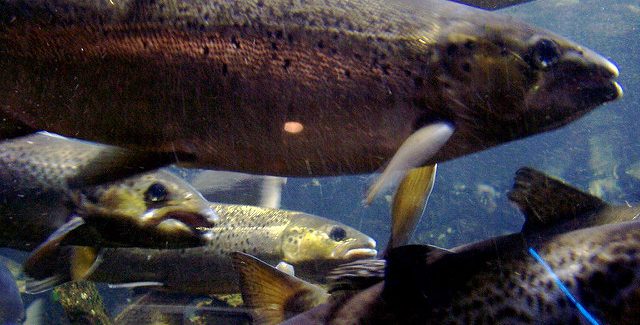 Fish sentience has become a hot topic among researchers in recent years. It’s something that Faunalytics has covered for a long time (you can find some examples in our library or use our search tool to find much more). Some of these studies have noted the implications of fish sentience, particularly as it relates to fish consumption. If we assume that fish are sentient, then we must also acknowledge the staggering numbers of fishes and shellfishes consumed by humans. And just like chickens, pigs, cows, and other animals, we need to consider the welfare of fishes during capture and slaughter. Regulations to that end are absent in nearly every country in the world.

The purpose of this study was to expose Atlantic salmon to CO (carbon monoxide) before slaughtering them, in order to see how the gas can affect adrenaline (AD) and noradrenaline (NAD) plasma levels in comparison with fish killed percussively. AD and NAD are thought to indicate a stress response in fishes. The researchers were studying CO both as a stunning method and also to evaluate how the use of CO might affect the quality of fish meat that is produced. Previous research has found that Atlantic salmon didn’t (seem to) take notice of CO when it was injected into a tank by a diffuser. This study, carried out at the Institute of Marine Research in Norway, studied the topic in a laboratory.

According to the researchers, the behavioral analysis that they conducted showed “that salmon do not sense the CO gas.” However, they also state that “at 8-10 min, the fish respond with aversive behaviour before becoming fully sedated.” They also noted that CO stunning resulted in an earlier onset of rigor mortis, and a lower final post-mortem muscle pH. Their study was limited by the way that CO was injected into water. They note that to improve stunning, it would be necessary to figure out a way to actually dissolve CO into water, which is a difficult task in and of itself.

Many animal advocates will understandably balk at the methods and the purpose of this study. Indeed, research that uses captive animals to support conclusions that are geared towards further animal use can be hard to stomach. That said, if we believe fishes are sentient and are serious about their welfare, then we should also consider their experiences during slaughter in the same way that we consider the “humane” slaughter of mammals and birds. Advocates have long made an effort to help cows, chickens, pigs, goats, sheep, and other animals have less horrible deaths in slaughterhouses — fish shouldn’t be left behind in this push. Considering the number of fishes consumed per year, it’s an important area of study.