More than 60% of animals used in forensics tests are never anesthetized. Even for those who are, the procedures they undergo are brutal and cruel.
ABSTRACT ONLY Only an abstract of this article is available.
PEER REVIEWED This article has been peer reviewed.
ANIMAL RESEARCH This article involves research on captive animals, which Faunalytics opposes.
Summary By: Karol Orzechowski | This is a summary of an external study | Published: August 14, 2015
Photo by Flickr user rdecom 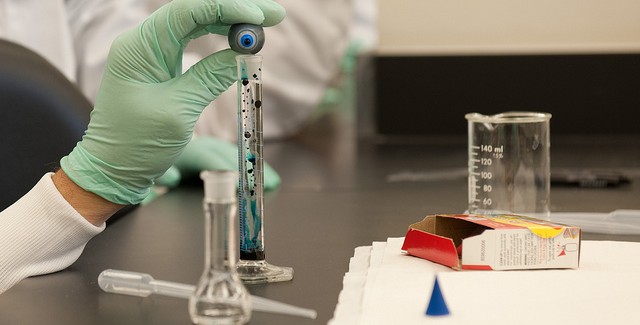 More than a hundred million animals are used for testing in laboratories around the world each year, fueled by the scientific belief that using animals leads to results that are safe, sound, and useful for humans. According to an article published in Forensic Science International, the use of animals in forensics testing is, “in most instances,” questionable. This study reviewed published scientific papers that have used animals in their experiments, and found that they had limited relevance. Some articles actually stated that the main thing they had achieved was “to expand the curriculum vitae and the career prospects of the researcher.” In forensic science, the use of animals has serious problems with validity and practical application.

Despite these findings, the authors note that the use of animals in forensic research is not only continuing, but increasing. While some forms of animal experimentation may be considered less violent than others — which, of course, does not mean that they are more ethical — forensic science is on the more painful end of the spectrum. In 1992, a review was carried out to look at the types of research being performed on animals in forensic science. The authors found examples such as the infliction of wounds and burns for dating lesions by histological and histochemical techniques, and drowning unanaesthetized dogs, revealing some of the most blatant examples of brutal and scientifically dubious procedures. The “pointless abundance” of such experiments led the editors of forensic journals to discourage animal testing.

Yet the authors of this current paper note that the earlier study has not “modified or evolved [forensic science’s] attitude towards animal experimentation.” The new review finds the administration of pesticides, production of traumatic brain injury, gunshot / stab wounds to pigs, studies on the effects of hanging, electrocution, and more. Though many of the papers reviewed state that ethics committees had approved their research, journals rarely require proof of this, and the authors suggest that “journals should develop their own standards to such research as well and apply it.” The new study found that “in a disturbing 20.7% [of published articles] the presence of anesthesia was not specified.” In addition it states that, “along with the actual pain the animals would certainly undergo for most experiments if no anesthetic were given, one should also bear in mind the strong ethological and neurological evidence that non human animals can anticipate suffering and can experience fear.” In other words, not only are the procedures painful and brutal, but the life that the animals live is also one of stress and fear.

In all of this, the authors note that forensic science should face more scrutiny. While other aspects of scientific research are — ostensibly — geared towards the advancement of human health, forensic research doesn’t have the same goals. Instead, it’s focused on possible assistance in understanding criminalistic issues (such as “estimation of post mortem interval, assessment of injuries, etc.”), and the research procedures reflect this. As a consequence, the authors note that the killing of animals is “more questionable, as are the results obtained by the studies, given the biological differences between humans and non humans.” It is a stunning and important admission, made by scientists themselves.